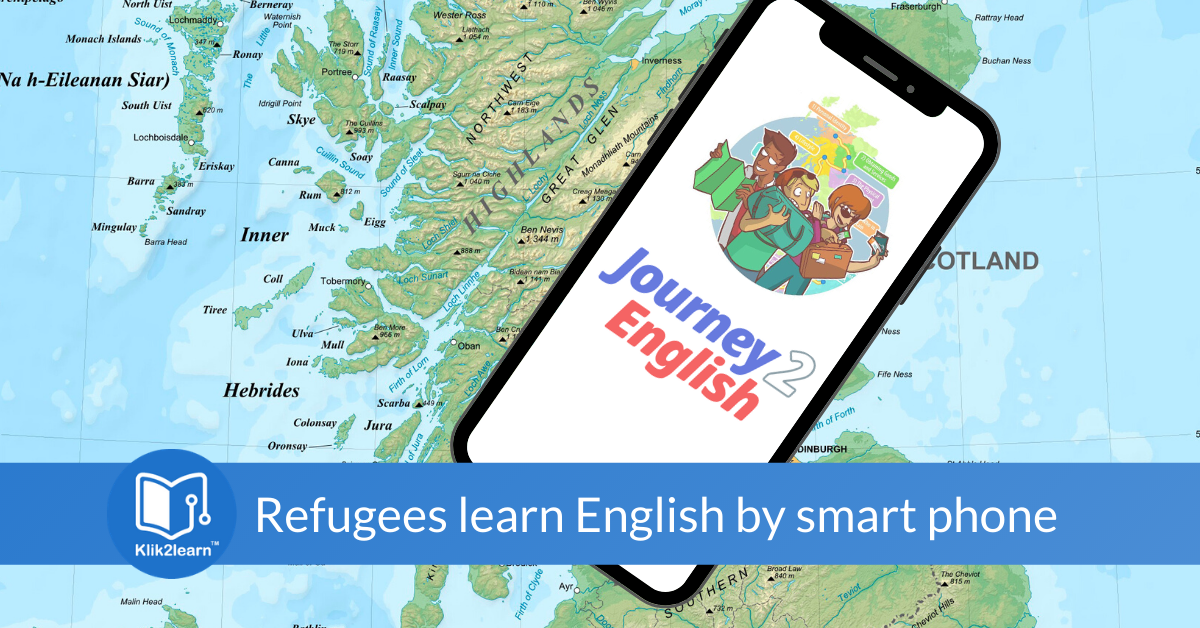 A total of 30 families from war-torn Syria are being taken in throughout the Highland Council area, including four in Alness.

But it was the arrival of refugee families on the isle of Bute in January which first presented officials with the problem of how to help vulnerable people with little or no English to integrate in an isolated community with no support facilities.

Now former Portree High School teacher Ann Attridge, who has a post-graduate degree in linguistics, has developed the first English-language qualification that refugees can sit and pass on their mobile phones.

She used technology normally associated with the computer games industry to produce “Journey2English”, an interactive language course that students can access on their smartphones.

Journey 2 English combines games with multiple choice tests, a digital notebook in which students and tutors can communicate, a voice recorder so that they can share audio files and a discussion forum on which they can practice their language skills.

It helps non-native speakers learn English within three months and, by passing a final test, they can gain a qualification, equivalent to a National 4, validated by the Scottish Qualifications Authority.

The course, launched earlier this year by her Glasgow-based company Klik2learn, is also being used by eastern European migrants for whom work and family commitments mean they do not have time to attend language classes.

Ms Attridge left her job as an English teacher at Portree High School in 2010 to take up an Enterprise Fellowship with the Royal Society of Edinburgh. She said: “I was approached by officials from Renfrewshire and Argyll and Bute councils who have been tasked with caring for Syrian refugees placed in their areas by the Home Office.

“They were at a loss about what to do with the 29 asylum seekers who had been placed in those comparatively remote parts of the country without the necessary skills in English to be able to communicate properly.

“The funding they received covered housing and schooling for the children but there was only enough money to pay an English tutor for a couple of afternoons a week. The rest of the time they were hanging around with no access to IT and their English was not improving.”

Recent News
Categories
Archives
We use cookies on our website to give you the most relevant experience by remembering your preferences and repeat visits. By clicking “Accept All”, you consent to the use of ALL the cookies. However, you may visit "Cookie Settings" to provide a controlled consent.
Cookie SettingsAccept All
Manage consent

This website uses cookies to improve your experience while you navigate through the website. Out of these, the cookies that are categorized as necessary are stored on your browser as they are essential for the working of basic functionalities of the website. We also use third-party cookies that help us analyze and understand how you use this website. These cookies will be stored in your browser only with your consent. You also have the option to opt-out of these cookies. But opting out of some of these cookies may affect your browsing experience.
Necessary Always Enabled
Necessary cookies are absolutely essential for the website to function properly. These cookies ensure basic functionalities and security features of the website, anonymously.
Functional
Functional cookies help to perform certain functionalities like sharing the content of the website on social media platforms, collect feedbacks, and other third-party features.
Performance
Performance cookies are used to understand and analyze the key performance indexes of the website which helps in delivering a better user experience for the visitors.
Analytics
Analytical cookies are used to understand how visitors interact with the website. These cookies help provide information on metrics the number of visitors, bounce rate, traffic source, etc.
Advertisement
Advertisement cookies are used to provide visitors with relevant ads and marketing campaigns. These cookies track visitors across websites and collect information to provide customized ads.
Others
Other uncategorized cookies are those that are being analyzed and have not been classified into a category as yet.
SAVE & ACCEPT
Coming soon!